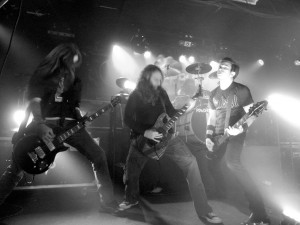 Powderburn have been an Austin institution for the past two decades.  Despite the band’s quirky interview responses, the quartet’s stage show is a force of light and sound.  LSM editor, Rusty Conner, had a chance to pick their brains on what makes Powderburn tick, and the answers were quite possibly fueled by Jager as they made their trek across the vast state towards a gig in El Paso.

Ken: Would you ask that to Tom Petty? (We’ve decided…yes, we would ask Tom the same question – Ed.)

Eric: Our live show is what makes us unique. We bring lights, lasers, smokers, and as much crap we can fit in our trailer. We try to put on the best show we possibly can, until the eight shots of Jager reach the stage, then it’s anyone’s ball game.

LSM: One Fix has been out since 2009, and I can’t help but take note of Ken’s decapitated head on the cover. What was the thought process behind this cover? 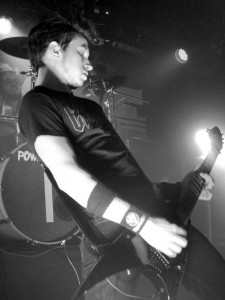 Joel: Finally someone did what we all wanted to do!

Ken: Watch the “One Fix” trailer on our YouTube. It explains everything.

LSM: Tell me briefly what changed within the band on this album? How will this change affect the new material you may have already written?

makes sense that he joined the band.

Eric: I brought the thunder!!

LSM: Is there any one song that is a representation, both musically and lyrically, of Powderburn right now?

Eric: Musically, yes…lyrically no. I don’t know what Ken sings about, but the riffs are sweet.

Dale: It varies wildly depending on how many cigarettes Greg’s had.

Ken: Odds are, even if you don’t like our music you’ll like our live show. If you really want to see a crazy show, come watch us play when it’s less than 70 degrees outside because we’ll probably be running around like crack heads since we’re used to playing in nothing less than 105 degrees. 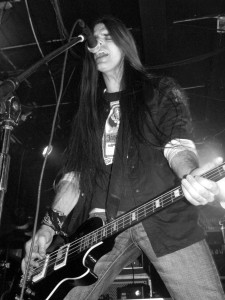 LSM: You guys hit the scene around 1999. What do you attribute to your longevity on the Metal scene?

Eric: I’m only 25; I was in high school when these guys came out. What I think keeps these guys going is pure hate.

Ken: Yeah so what, I was in high school when the band started.

Joel: A five year break…oh wait, that was just me.

Dale: Truth is, Greg is a trust fund baby and he keeps us gainfully employed.

Ken (again): Yeah, every week I have to take out Greg’s trash and change the oil on his bike.

LSM: How has your vision for the band changed from when you began?

Joel: I have a new contacts prescription.

Ken: It’s become much better since my Lazik surgery.

Ken: No…but I really did have it!

Dale: At first I thought this band was going to go somewhere.

LSM: Are there any musical boundaries that you, as a band, have decided not to cross? 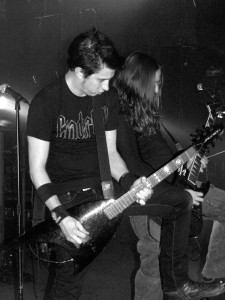 Joel: Once again, the little fuck-midget took my answer!

Ken: Ok, I have another one…Joel Greg Ken.

LSM: What does the future hold for Powderburn?

Dale: 150 years of prosperity and glory!

Eric: We are always writing new stuff. We have a plan to release a whole mess of new songs. Hopefully one gets attention 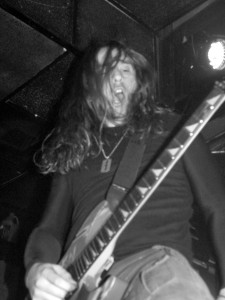 and gets us to that next level. You know, that level where you get half priced drinks at every bar you go to and unlimited hi-5’s. Oh yeah.

Ken: I don’t know anyone who has bought music in the past two years.

Eric: You know me.

Ken: All you have bought is Lady Gaga.

Eric: Does any of this really matter, 2012 is right around the corner? (Eric alludes to the Mayan End-of-the-World prophecy theory – Ed.)

Ken: We plan to hit the studio soon with Sterling Winfield who did the last few Dimebag & Hellyeah albums in November. And we just got finished recording a few songs with Kelly Clarkson’s guitarist, Aben Eubanks.

Eric: Yeah, we plan on releasing those songs in late October so keep a look out for those. Thanks Rusty and thank you TEXAS!