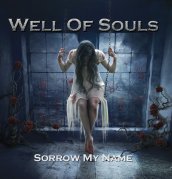 Up for review at this time is the CD from Houston’s doom metal band Well Of Souls. Released earlier this year on Brainticket Records, it’s already gotten mixed reviews internationally from good music critics, as well as the stupid ones. I’ll let you figure out who’s who.

If you’re unfamiliar with this band, they might tell you they’re influenced by bands such as Candlemass and Solitude Aeturus, but I’d say they deliver more of a hook by way of the musical and vocal melodies. Well Of Souls is currently comprised of 4 members of equally gifted talent. John Calvin delivers hauntingly pure and uniquely inflected vocals on top of thick guitars played by John “OJ” Morris and Tim Wayne. And, on the NS Stick bass, Well Of Souls has recently acquired one of Houston’s most talented and quirkiest of members, Michael “Dr Froth” Millsap.

This collection of dark and broody songs begin with the title track, Sorrow My Name, and takes you on a journey of pain, introspection, and a defiant hopelessness that lasts throughout the entire album, and beyond. Well thought out lyrics paint a richly-colored tapestry, shedding a dark light on a tormented subject that invokes an internal desire for an external change. Richly-toned guitars add thickness greater than maple syrup stored at 5 degrees C. And intricate bass lines woven in between keep the doom metal’s characteristically sedate tempo interesting and slightly upbeat.

There are two top tracks on this CD for this reviewer. The first, The Pain’s Not Forgotten, with its different movements eloquently stitched together convey a passion and rage unequalled on the rest of the disk. The second top track is Ashes Of Despair. I’d almost swear I hear some old-school Black Sabbath in there somewhere. Calvin sings with heart in this one, and the guitars are playing hooky riffs one after the other.

Another interesting track is Sanity’s Lie. The instrumentation here perfectly demonstrates the song’s title, even without reading the lyrics. After listening to this one, I not only thought I might need to be fitted for a straight jacket, I actually believed wearing one would be freakin’ cool.

The weak points on this project are small, but highly important. Some important timing issues can be heard on some of the songs if you’re listening for it. And, now that I’ve said that, only the anal-retentive and morosely myopic are going to try to listen for them. Hey, morons…  you still spin the Beatles albums backwards, too? Another weak point would be the overall “thinness” of the mastering on this CD.

For those who don’t know, mastering is the final process in a recorded project involving a general equalizing of all of the frequencies heard on each of the songs. Often a very time-consuming process, if not done correctly, it can leave the entire CD sounding not quite as dark and gloomy as one might think it should. Hell, it could also make the bass player sound like he’s plucking someone’s pet ferret. And who would want that, right?

Those two issues aside, I was still impressed listening to Sorrow My Name. Not being particularly fluent in the genre, I still found it pleasing (doomfully so) to crank in my headphones. For others that either know nothing about doom metal, or typically dislike it, you might still like this band for their unique style that’s a little bit commercial (that means easy to listen to), and a little less obscure than you’d expect. This CD might just stay in my Jeep’s player for some time to come…