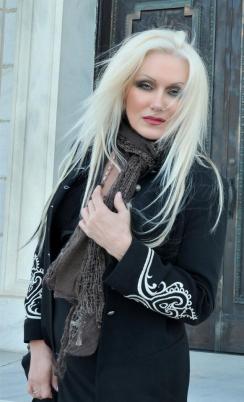 Everyone knows her. She’s “Suite Sister Mary” and she’s been blowing your speakers since the 80’s; however, Queensryche’s notorious nun is truly much more powerful than previously imagined. Pamela Moore has a new label, Rat Pak Records, and a stellar new album that is guaranteed to evoke an emotional response from the listener. Resurrect Me hits record stores on May 14th and is poised to cast Moore into the spotlight that is currently shining on a true resurrection of the hard rock and metal genre.

“I’ve been under the radar for a while,” Moore said. “My last album, Stories from a Blue Room, was in 2006, and while I don’t want to take anything away from that album, this is the one I truly wanted to write. This album took a long time to make because we do have life that happens in between projects, but I write from the heart and a lot of the songs come from personal experience or things that I have shared with others.”

Right about the time that Moore released her 2006 effort she was tapped to tour with Queensryche for Operation:Mindcrime II and she didn’t get to spend the time she would have liked on that particular release, so she has moved full speed ahead with the new record and has tapped some of the genre’s best talent to accompany her.

“Jeff Loomis (Nevermore) plays the solo on “Awakening” and I did the majority of the collaborating with guitarist Michael Posch,” she said. “Michael was sending me some really great stuff and it fit perfectly with the words I had written. Brooke Lizotte also played piano on the album and we had Chuck Macak on drums. “

Resurrect Me was produced by Moore, Posch, Macak and Mark Alano and had a cast of well-known contributors on backing vocals like Ralf Scheepers (Primal Fear), Aury Moore, Patrick Moore, Brenda Kashmir, Randy Piper (WASP) and Scott Bowen.  The tunes wring an emotional response from the listener and Moore recognizes that the songs can have that effect.

“I’m something of a bleeding heart,” she laughs. “I thing that there is growth and reflection that comes through in the music. For example, “Wide Awake” is about a rebirth for me from more than four years ago until now and “We Are Damaged” is about big government and big corporations and their effect on our lives. There is definitely a slant there about how I feel about certain things.”

Another idea that Moore toyed with was the doomsday prophecies of the world ending in 2012. What would happen? Could it happen?

“The track “The Sky is Falling” ties directly in with the idea that the whole world may have ended at the end of last year and whether or not I am okay with how my life had been. It was reflective of knowing if you are in a good spot for something like that to happen. Would you be ready if it did? I looked back on my life and career and while obviously didn’t happen and the song was written prior to that time, I can honestly say, yes, I was okay.”

Other tracks on the album, like “Melt Into You” and “Paranoia” are edgy, heavy tunes that Moore says coincide with different points in her life that she had to commit to lyrics. Her form of self-expression clearly makes for a full album and more, as she says she is working on even more music for later on in her career.

Moore is a commanding performer in her own right and is not in the midst of the current Queenryche controversy. She remains separate from it as it is not her battle and she takes a diplomatic stance on the subject.

“We must have opportunities to grow and I have come to the realization that change is not a bad thing,” she said. “I wish them all the best of luck.”

Moore’s growth includes working on selecting a touring band to work with that includes Posch on guitar.  She said that Piper also sits in with her on practice sessions and right now she is concentrating on getting ready to start scheduling shows and eventually a tour.

“I have some special dates that I am hoping to do,” she said. “I would also love to tour and get out there to shop the album. I have toured with Queensryche and a couple of years ago I toured with Primal Fear and I am ready to get out there on my own.”

Until that time, fans can order the new album from Rat Pak Records or other media outlets. Moore’s social media sites are also updated with current information on her music and appearance schedules.