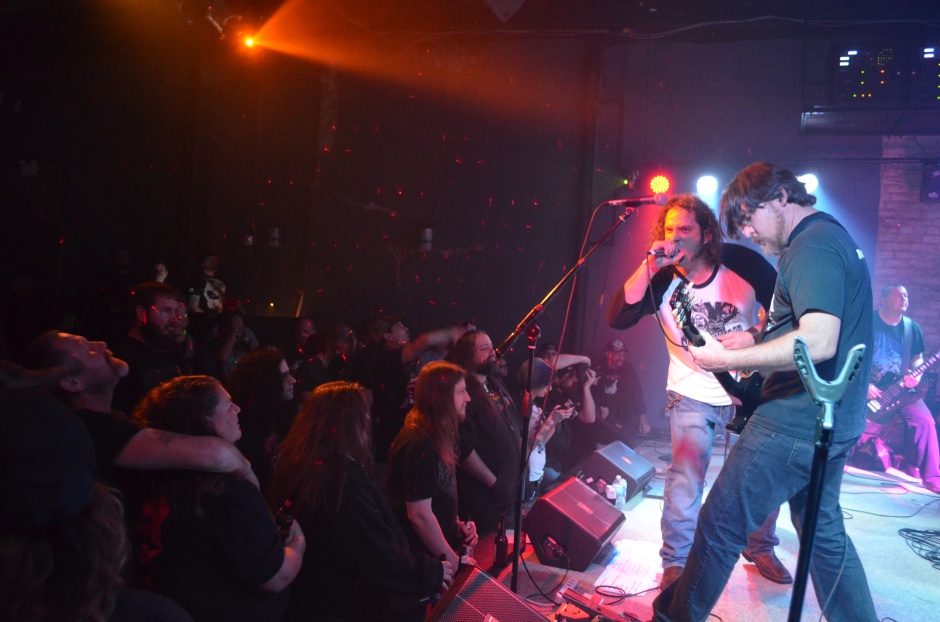 Picture yourself on an old cream colored 70’s style couch.  You just witnessed the rebirth, or even resurrection, of Texas Thrash first hand. Now you have the honor of striking up a conversation with a few individuals responsible for the Frankenstein’s monster of a band called Deadhorse, a band who is as notorious as it is infamous for their tongue in cheek take on an otherwise all too serious genre.  I had the distinct privilege of doing just that with founder, Greg Martin, guitarist Scott Sevall and newcomer to the band and vocalist, Argo, in the upstairs lounge of The Grand Stafford Theater in Bryan, TX.

Lone Star Metal: Scott has stated in an interview that the re-release of the Boil(ing) CD sparked the reunion.  Why was there a re-release of the disc in the first place, and how did it lead to your first reunion show in 2011?

Scott Sevall: Well, our former manager kinda masterminded the whole thing.  He got me in on it, but it was him and Ronnie’s plan.  He talked to me, and I was like I’ll talk to fucking Allen.  Allen was like yeah, but Greg will never do it.  Our former manager got Greg to do it. So, once we decided we were gonna do it, I found an old tape of a show we did at Warehouse Live where we were all singing.  I gave a CD to every one of these guys.  We were like, this fucking sucks.  We were horrible. [Everyone laughs]  In comes Argo after that.  I told Greg one time we needed to get a lead singer.  I’m not a singer I’m a guitar player.  He said, I don’t care if fucking Lemmy was offering, we are a four piece band.  I brought that up when Argo came in, and he [Greg] said; that was then and this is now, and we can’t sing.  It took months of practice, long story short.  It took a good four months just to be ready for that one show.  This motherfucker that wrote 90% of the songs [indicating Greg Martin] couldn’t remember none of them.  Deadhorse was dead to him.  He moved on.

Greg Martin: After Deadhorse broke up, dude, I closed my guitar cases and I pushed them under the bed.  I didn’t play another guitar for like three fucking years.

LSM: That’s not an uncommon story I’ve heard from some of the older bands.  Larry Barragan told me the same thing before his reemergence.  I guess my question, Greg, is: why? 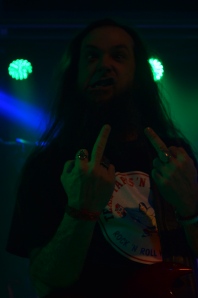 GM: I was pissed off.  I’ve never been one to think that Deadhorse was arena sized or anything, but I thought we were doing good and putting out good shit.  We made some bad decisions ourselves, and whatever money came our way we fucking blew.  I just hated the industry.  I hated everything about it.  I was a welder and just immersed myself in that.  I worked six days a week, and didn’t give a fuck about guitar.

SS: I think when we split up, it pretty much broke his heart.

LSM: I’m hearing that the reunion was really dependent on you, Greg, so what changed your mind?

GM: I don’t know.  Ronnie and the bass player for PND [Pasadena Napalm Division] at the time kinda had a plan.  It was some stuff I don’t wanna go into, but it was gonna help squash some of the extra bullshit between us and Mike Hagga basically.  So, I agreed to do one show.  We started practicing and it was rough.  It sucked.  That same guy, the PND bass player, said he knew a dude.  So, he had Argo come out and we’d only met him that one time.  We played “Codpiece Face” and “Turn” and he fucking nailed it—

GM: That was the turning point for me.  Yeah. Fuck it.  Let’s do the reunion show and have fun with it.  One thing led to another, and now we’ve got about five new songs.  We’re gonna put out a new record.

LSM: Argo, tell me about your transition into the band, and how it feels to be in a legendary Texas Thrash band like Deadhorse. 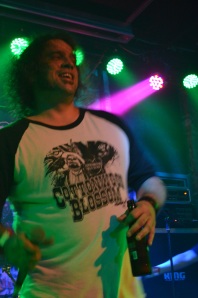 Argo: Dude, I know Deadhorse has history.  I grew up a fan of Deadhorse.  I used to go watch them play and all that.  I’ve been playing music for 20 years.  I’ve seen a lot of shit before I even got in this band.  It’s not like being up there is too big for me.

SS: He wasn’t all star struck when we started jamming with him.

Argo: I hate to downplay, emotionally, how I feel about it because it’s a fucking rush to be on the stage with these fucking guys that were one of my main influences.  At the same time I got a job to do and I do it, like a mercenary.  I didn’t want to let them down.  I don’t want to be the asshole that drags Deadhorse down.  I gotta kick it in the ass.

LSM: Talk to me about that first show.

SS: Me and Argo had a lot of hugs before we went onstage. [He chuckles]

Argo: You have to understand that they didn’t let anyone know there was a new singer.

SS:  There were very few people, even those close to the band that knew about Argo.

GM: When we first started playing, the crowd was like: Yeah!!  When he came out, you could see everyone’s hands go down.  It was like: What the fuck?  It was hilarious.

Argo: It stayed within the band that there was a new singer, so there was a lot of pressure to show up and kick ass. 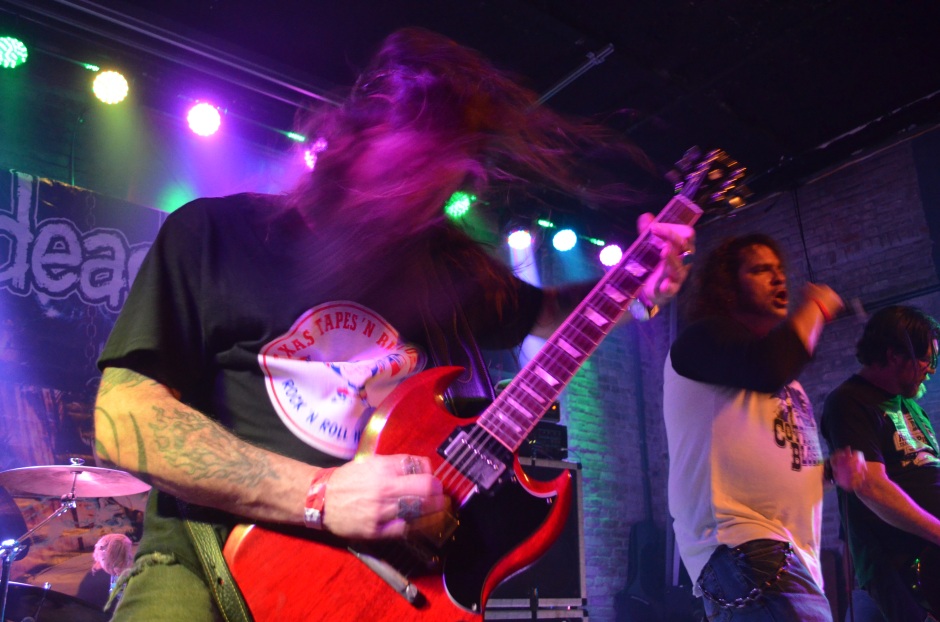 LSM: What do you attribute to the longevity of Deadhorse’s music?

SS: Songs, number one, and when they see us live, they see we’re having a blast onstage.  We don’t take ourselves seriously.  That’s what this is about.

GM: We can’t take ourselves seriously.  I mean, have you heard us play? Come on! [He laughs at himself] 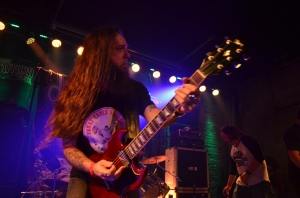 [Laughs all around] GM: I sure hope so!  Wait’ll you hear “Donkey Punch!”

SS: We’ve always been all over the place from fast to slow.

GM: We’ve never been pigeonholed.  We’re not worried about limitations or labels.  We just flat out don’t give a fuck.

LSM: Besides the obvious line up differences, how is Deadhorse 2014 different from the Deadhorse of 1987? 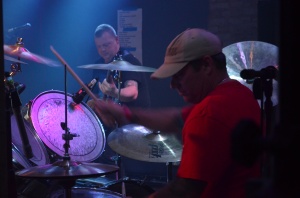 GM: When Deadhorse first started out, Ronnie came to my mom’s house.  We just clicked that first time.  That was the start of Deadhorse for me.  The camaraderie was a real “all for one and one for all” attitude.  Everybody cared for each other.  At the risk of sounding like I’m talking shit about somebody; as we started getting bigger, and people started to know our name, Mike got a real big fucking head…still to this day.  That’s why I won’t talk to him, but it’s back now to the way it was; which is the way it should have always been.  That is what fucked everything up.

SS: The band was never just one person.  There’s a lot of people who think Mike wrote all the shit in Deadhorse, but this guy [pointing at Greg] wrote 90% of the shit.

GM: Mike wrote most of the lyrics and very few of the songs.  It is what it is.  He wanted to make all the money, but when Scott got in the band it went back to what is was.  Square shit across the board.  How it should be.  It’s the same with Argo.  You say he fits well.  It’s because he has the same attitude.

LSM: Anything else I didn’t touch on?

GM: You didn’t touch my penis, and I’m disappointed.