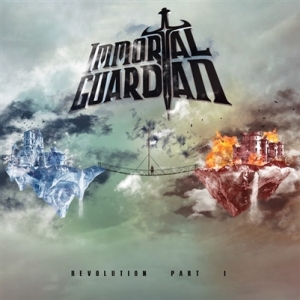 Immortal Guardian is a band that has been fighting an uphill battle to get to this release; gaining massive momentum with the addition of Carlos Zema on vocals.  Revolution Part I is nothing short of what has come to be expected from this Texas quintet; which is a European-esque Power Metal furor.  Guitarists Gabriel and Jyro established this from the start, and now that Zema has joined the fold, the sound is undeniable.  Gabriel’s additional skill on the keyboard lends a vibe that any Prog/Power fan will immediately attach to.

The album is only five tracks that leave you wanting more.  Each track can stand alone on the album, and there is absolutely no filler to be found.  The songs are well crafted.  Standout moments are the attention to detail; such as, the phonograph effect on the track “Immortal” and the varied use of Zema’s vocals.  I was pleased that not every song was just a high-register, vibrato vocal styling.  Carlos menacingly growls on a few tracks as well, which showcases a diversity that some may not know about him.  Though I would call this album a definite Power Metal frenzy, the variety sets it apart from the sea of other bands who simply want to show off their sweeps.  Try as I might, I couldn’t find anything to detract from the overall quality of the disc, aside from the number of songs.