A few nights ago, I was asked by Rusty to head down to Warehouse Live on a Thursday night and interview a band from Japan that was opening up for Sixx A.M. The band’s name? VAMPS. I wasn’t sure what to expect. I want to say I had heard the name before, but I wasn’t very familiar with their music. Considering the Japanese culture, I assumed they would be polite and very professional. I also assumed their music would be something bland, boring, and as much like 20 other bands from America as they could possibly emulate. I am ashamed to admit I could not have been more wrong. Yes, they were very polite and soft-spoken. Yes, they were very passionate about their craft. But I can honestly say that their music is anything but bland, boring, or like anything else I’ve ever heard. While one might be able to pick out certain things that one has heard another band play, one still hasn’t heard it like this. I caught the show after the interview and could not believe the intensity I witnessed. Even though they were restricted to a 30-minute set, which should be a crime for these guys, the show they put on was of a caliber not seen in many of today’s top American bands. As what I would consider an incredible testament to the band, I bumped into three ladies at the show who drove all the way from Destin, Florida to see the show. For them, it was completely irrelevant that they already had tickets to the VAMPS show in Jacksonville a couple weeks later. 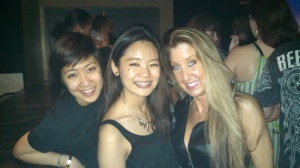 For reasons unknown, it appears to me as though the music industry in this country pays very little attention to music beyond its borders, with the exception of England, maybe. While VAMPS may be the greatest thing since sliced bread in their home country, they garner very little attention in ours. The ironic part is that their music and live performances, together with their creativity and raw talent would surely catapult them to stardom in this country…were they American.

So, at 6:00 pm on a Thursday evening before they were to hit the stage, I sat down with the two main members, Hyde and K.A.Z. In their quiet greenroom far from the stage, we made our polite introductions, and with their tour manager, Hiroki, translating, we sat down and began the interview…

Lone Star Metal: Describe VAMPS to someone who has never heard you before.

Hyde:  “How would I really know?” he jokes.  “The music is not just Rock music, but a combination of electronic dance music and the Rock music.  We’re not just a ‘Rock’ band.”

LSM:  What does VAMPS offer the music world that is missing today?

K.A.Z.: “I’ve listened to all kinds of music from the 80s, 90s, and all the good music.  I know what’s new now, so I mix up all those things to make an even newer model.  That’s what we are trying to come up with.  And this has been done by vampires…”  Hiroki then asks laughing, “You know they are vampires, right?”

LSM:  Why the vampire imagery and theme?

Hyde:  “First, I like anything about vampires.  But after I named the band VAMPS, I felt I had to be a vampire because I named myself one,”  he chuckles.

LSM:  You’ve created your own fest called VAMPARK Fest, which hosted Sixx A.M.  Tell us about the festival.

Hyde:  “At the very beginning of the idea, it was very hard to book all the international acts from America and Europe.  But at the end of the day, we had all the artists that we wanted to play with together.  We were very moved, and it was such a great a show having all the international acts playing at the same place at the same time.  Sixx A.M. represented the American Rock bands and VAMPS representing Japan was just amazing.”

LSM:  How does your new album, Bloodsuckers, differ from your other albums?

LSM:  What is one song from the new album that fully represents VAMPS? Why?

Hyde:  “The song, Bloodsuckers, from the title of the album.  You can feel the heart of VAMPS…the Rock Out part of the band, but at the same time it can be comical.  I feel that represents VAMPS.”

LSM:  How difficult is it for a Japanese band to break out of Japan..especially here in the States?

Hyde:  “In music history of all time there is not any Japanese Rock band that has really made it in the States…until now.  What we are doing now, is being pioneers, and tapping into a new market.  We’ve been trying something that nobody has tried before.  We don’t have a format to follow, and anything to learn from.  That is the hardest part for us.  Not just the band but the management, label, PR people…everyone.  This is a totally new, making history thing.”

LSM:  Last comments for your Texas and US fans…

Hyde:  “We are so happy to be in Houston for the first time.  We only have 30 minutes in our set, but we’re going to show the best we can do, and we hope everybody loves it!”

The full audio of the interview can be found here: