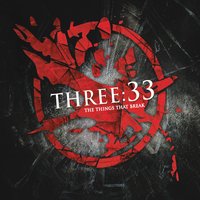 Three:33 are an alternative band from Austin.  They’ve been on the scene a little while, but sport a familiar face to the Texas Alt scene, namely Tony Park of Pushmonkey fame.  What sets this band apart is the expansive nature of the music.  Three:33 have not set any boundaries for themselves, and it translates well on this disc.

The Things That Break is a short, but well packed album of diverse influence that melds together into solid songwriting.  There are times the album is straight ahead Rock, like “Bounce or Break,” and there are more alternative tracks like “Bipolar Baby” that embrace a modern Faith No More vibe.  I’ve always believed if a band can turn a cover into their own song, then they have my attention.  Three:33 certainly have my attention with their cover of Peter Gabriel’s “Shock the Monkey,” which is an orchestrally acoustic rendition of this classic 80s tune.  The song was not at all what I expected, but brilliantly done.  Bottom line, great disc for anyone into this style of music.  I’m shocked they are not a radio hit already! (see what I did there?)