When you mention Wacken to almost any metalhead, you tend to get the same two reactions.

2 – I’ve been (insert number of times) and it is amazing.

Lone Star Metal has had an open invitation to the festival-to-beat-all-Metal-festivals for the past few years, and we decided the time had come to make the trip.  The availability of funds was another deciding factor.  To make a long back story short, we had the privilege of getting to know Miriam Hensel of the ICS Festival Group at SXSW when the band Suidakra came through on tour.  ICS is the machine that helps keep Wacken running, and we soon earned a spot on the media list for the festival.  Each year after, we reunite with Miriam during SXSW, and each year she extends the invitation to attend.  We were excited to inform her at this year’s SXSW that we would be taking her up on her long-standing offer.

Wacken, on its surface, is the epitome of what Metal can accomplish in Europe.  Nothing quite 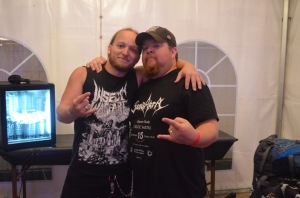 compares to the awe you feel when looking out at the sea of metalheads all united in a small farm town in Germany under the flag of Heavy Metal.  The lines between genres are blurred.  You can’t help but ignore the prejudices between the sub-genres when you walk across a field, after watching Ihsahn on the main stage, only to end up jamming to Ugly Kid Joe next to the same crazy dude that was only a few moments ago reminiscing about listening to Emperor for the first time while belting out song titles like “Towards the Pantheon” or “The Warriors of Modern Death” in the hopes that Ihsahn would play them.  The feeling of community is all about.

A real sense of this community can be seen in the campgrounds.  I did not delve into the general attendee’s camping area, rather I was camped out in the Media/Artist/VIP camping area; a fact I was thankful for after seeing the never-ending line for the shower in the general camping.  In either grounds, there are a conglomerate of metalheads united in one purpose; to celebrate Metal.  You see, Wacken is really two experiences in one.  The first, and most obvious experience is the music.  Three days, five stages, and music everywhere.  The other, less obvious experience is the actual gathering of people.  I found myself enjoying the company of those who spoke broken English immensely enjoyable over fighting crowds to try to get a good view of any certain band.  Don’t get me wrong, seeing Rammstein, Ihsahn, Gojira, and more on the main stages with thousands of people chanting choruses was absolutely amazing.  However, the moments that really stand out are the times between.  Sitting around the VIP lounge, the campground, and the interaction with like-minded individuals everywhere you turned was much more fun than I had anticipated.

The real adventure begins only after the traditional rains sweep through.  From what I’m told, the rain always sweeps through…sometimes staying and sometimes just passing by.  Fortunately for us, the rain was not in the mood to hang around, but just wanted to add some depth to the Lamb of God show that was already a madhouse.  You put metalheads up against a background wall of sound and a platform of mud, then you’ve got a show on your hands.  Thankfully we had a retreat from the rain in the VIP lounge, and watched the madness from closed circuit big screens.

By now you may be wondering, “What about the music?  Is this guy ever going to talk about the shows?”  The short answer is, “No.”  The long answer; you’d lose interest in the article if I detailed every show I saw.  If you must know, the bands I did get to watch, either in their entirety or only some of the set, were:

Bottom line; if you consider yourself a metalhead then this is the self titled Metal Holy Land.  Make the pilgrimage at least once; of course, the fest is already sold out for 2014 so you have time to save your money. 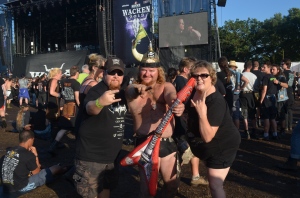